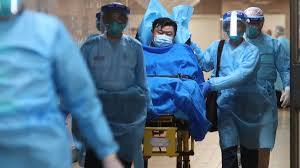 Thermal camera have been deployed in South Africa  to screen for possible symptoms of the deadly Wuhan coronavirus.  All passengers arriving at OR Tambo International airport are being screened.

Speaking to eNCA, Thandeka Nsele of the Port Health Services said that her department was primarily focused on screening passengers on high-risk flights, but that all passengers are being scanned.

“Before you even reach the immigration counter, a thermal camera operator stands a metre away from you and points it at your face,” she said.

“If the temperature is high we have visual imaging that marks in red. If the fever is high (the passenger) is then referred to the port health clinic for further screening.”

Nsele said that passengers are also given a questionnaire that is shared with airlines.

This includes information about whether the passenger has travelled to China recently, and whether they are experiencing any of the symptoms associated wit the Wuhan coronavirus as outlined by the World Health Organisation.

Despite the use of this technology, the Democratic Alliance has warned that the country’s emergency protocols may not be enough and that stricter measures need to be put in place at all our ports of entry.

In a statement on Sunday (3 February), the party called for a debate in the National Assembly to discuss the coronavirus and other pandemics.

“The coronavirus is spreading rapidly across the world, having started in China, with cases now being recorded in over 18 other countries,” it said.

“Experts have warned that the Chinese Health System, which is far stronger than the South African one, was rocked by this virus. While there were other exacerbating factors which led to the rapid spread of the virus across China, the reality is that South Africa has deep cause for concern.

“A patient has now been identified as infected with the coronavirus in Botswana, our neighbouring country. Effectively, this means that the virus is already at our borders.”

Concerns over the spread of the coronavirus are escalating as the death toll has jumped to 361 with 17 300 confirmed cases globally.

Travel restrictions on about 40 million people around Wuhan, in the Hubei province of China, have been introduced in an effort to contain the outbreak. However, cases of the virus have been confirmed in 25 other countries/regions as far away as France and the US.

Despite China’s efforts to contain the spread of the Corona Virus and mitigate all the risk factors, the risk of Economic disruptions remain high. This is according to Schroders Senior European economist and strategist, Azad Zangana who says the outbreak has already hit investor confidence.

“Restrictions on travel and the concerns of the general public will likely dampen household demand in China, as well as reduce tourism. Combined with the potential delay in businesses returning to normal output, the risk of China’s growth falling below 6% year-on-year in the first quarter is rising,” he said.

The spread of the virus has sunk sentiment around emerging markets, causing investors to avoid risk – something which is factored into the price of the rand, among South Africa’s many local issues.

A 2019 report by the World Health Organisation’s (WHO) warns that a pandemic can also have a more direct impact on South Africa’s economy.

Epidemics and pandemics devastate economies, the WHO said, noting that outbreaks in the last 20 years alone have cost the global economy upwards of $140 billion.

“Estimated costs of past events include: a loss of over $40 billion in productivity from the 2003 SARS epidemic; $53 billion loss from the economic and social impact of the 2014-2016 West Africa Ebola outbreak; and the $45 billion to $55 billion cost of the 2009 H1N1 influenza pandemic.”

For South Africa, the impact would be around 1% of GDP, which is around R55 billion at 2018 levels.

Current Health will offer its RPM device at Ugandan hospital to improve ...